The Bahamas has never been closer to Miami. (As reported on Caribbean Journal) 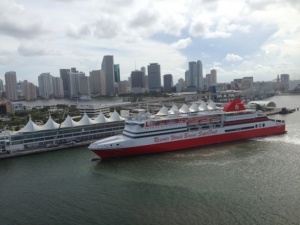 The Malaysia-based Genting Group has debuted its new Bimini SuperFast cruise ship, which will ferry as many as 3,000 passengers daily between Miami and the island of Bimini, located around 50 miles from the coast of Florida.

The 32,000-ton ship, which has a top speed of 30 knots, features a small casino with live table games, six food and beverage outlets and a nightclub. It will take passengers to the company’s new Resorts World Bimini destination resort. 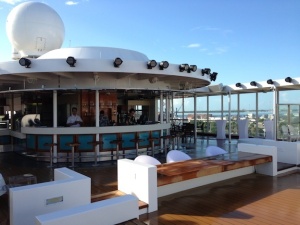 Above: the nightclub on Bimini Superfast, which will feature DJs from DJ Vertigo’s Don’t Look Down productions

“It’s actually a game changer for the people of Bimini,” said Dana Leibovitz, President of Resorts World Bimini. “We’re looking at bringing as many as 3,000 people a day to the island of Bimini — we’re introducing its beauty and majesty to the people in Miami. Everybody knows where Bimini is, but very few people have ever been to Bimini.”

The two cruise options will include one “Day Explorer Cruise” that departs at 9AM and returns at 7PM daily, along with a “Night Party Cruise,” which will depart from Miami at 9PM and return at 5AM the next morning, including “live entertainment, DJS, dancing, dining and gaming,” Resorts World said.

Genting has renovated and rebranded the former Bimini Bay Resort into Resorts World Bimini, a 250-room property that includes two pools, four restaurants and a 10,000-square-foot boutique casino alongside the Bahamas’ largest yachting and boating complex.

Above: Bahamian Junkanoo at the opening ceremony on Friday

The opening represents the culmination of a nearly 10-year process, he said.

To put the ship’s local impact in perspective, 3,000 tourists per day would be nearly double the entire population of Bimini, which has been quietly looking to capitalize on its proximity to Miami over the past few years through efforts by the then-Bimini Bay and a new Spanish ferry operator, Balearia.

Above: table games on Bimini SuperFast

“It’s taking a little longer than we had hoped but it’s going very, very well,” he said. “We’re going to sail as quickly as we possibly can.”

Resorts World Bimini is the latest project for the Malaysia-based Genting, which is also planning a major resort on the former site of the Miami Herald in downtown Miami. It paid $236 million for that site in 2011.